TopoGEN has extensive experience with cell-based screens for topoisomerase targeting.  Our staff scientists developed and published a method for detecting covalent topo/genomic DNA complexes in live cells (1,2) that is widely utilized in the field.  The method, called the ICE Assay (In vivo Complex of Enzyme) originally required a CsCl gradient to purify genomic DNA and specific topo antibodies to detect trapped topo protein in the DNA fraction.  This method, while powerful, is slow, labor intense and requires large expensive equipment.  We have modified the technique to allow direct isolation of DNA/topo complexes in a single step, omitting the CsCl gradient step and rapidly increasing the throughput of the method (see Diagram below).  The key to specificity is the use of TopoGEN’s highly directed antibody reagents to detect complexes.  The ICE Assay can be carried out in a day and a half with results visible early the next morning. The analysis can be conducted on virtually any cell or tissue system as long as proper controls are performed and mono-specific antibody reagents are used. Finally, the assay is no longer limited to 6 samples per run (for the ultracentrifuge rotor), so larger throughput is possible. Our new ICE method is rapid and convenient and can be used with any topoisomerase target (I, II, III).  TopoGEN also offers convenient internal controls to efficiently assess and validate the results (sold separately as TG1020-1REF for Top1 or TG1020-2aREF for Top2a.  Please enquire.) 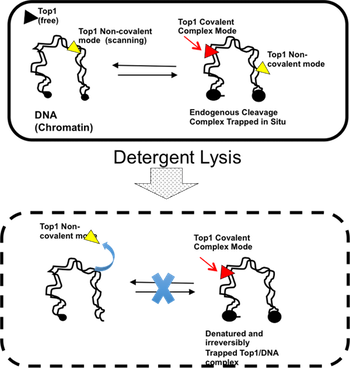 As a companion control/reference to our Human Topoisomerase ICE Assay Kit, we offer convenient internal controls to efficiently assess and validate the results.  This reference is genomic DNA prepared from cells treated with Camptothecin and a corresponding negative drug control.  The TG1020-1REF Product has a very high ratio of +Drug:no Drug genomic DNA (from Hela cells) corresponding to an idea ICE-Delta (or ICE-D).  This reference  control DNA is meant to be a companion product to the ICE Assay Kit for Human Top1 covalent complexes. We actually provide two genomic DNA references:  one from untreated human cells and one from human cells treated with Camptothecin (30 min 2.5 uM).  If you have never done ICE assays before, these REFS will help you get the assay established quickly and effectively in your own lab.

Sample data show the specificity of the REF marker DNA (a blot probed with a monoclonal to Human Top1).  Two genomic DNAs are included in the product (NEG and POS or negative CPT and Positive CPT treated genomic DNA).  Also shown is a VP16 treated control (not included) that shows the assay responds to Top1 as expected.

Specific Antibodies Define the Target Enzyme for Each Kit.

*We include Topo I as a control since there are no validated Top3a or b poisons.

By including a Topo I AB and Camptothecin, you can be assured that the ICE assay is working as expected.

This kit may be shipped at ambient temperature. Store at -20°C upon receipt. TG1020-1REF is shipped on blue ice (domestic) or dry ice (international).

The method is optimized for adherent cells but can be adapted to other formats as necessary (suspension cells, fresh explants, primary cells, nuclei, etc.).   Cells are treated with relatively high concentrations (10-100uM) of drug (either control, like VP16 or camptothecin, for short times, 30-60’).  Short drug exposures minimize overt toxicity and complications that come with cell damage.  For example, a 1h exposure to very high inputs of highly toxic drugs (camptothecin at 50uM) are tolerated and no obvious cyotpathic cell effects.  Cells are lysed, DNA is prepared using a novel procedure that recovers genomic DNA plus complexes.  Complexes are detected by standard Western slot blots.

An example of the results obtained with the ICE Assay Kit for Top1 and Top2a is shown in Fig. 1. It is important to always run negative drug controls (being sure to set up a solvent control; i.e., ‘no drug’ would receive the same concentration of DMSO if the test drug was dissolved in this solvent).  An important parameter with these controls (using known positives and a no drug solvent control) is a metric called the ICE Delta (or ICED).  The ICE Delta is the ratio between the positive drug control (example, VP16 for Top2) and the negative drug control.  This ICEDratio (+Drug/no Drug blot signal) should be 3 fold or greater for validity.

In some cases, the ICEΔ  may not be clear cut.  This sometimes is dependent on the DNA inputs, which is why we recommend testing a range of DNA concentrations.  For example, Fig 2 shows a titration with increasing inputs of genomic DNA over a wider range.  In this case, the ICEΔ varies from 3 fold to 8 fold.