Screening for Topoisomerase Inhibitors and/or Poisions.

Anticancer Screening for agents that target Human Topoisomerases:  How we can advance your R&D.

These drugs block or restrict catalytic activity of the enzyme. Typically, CICs will act at steps 1 or 2 in the overall reaction sequence (see Fig. 1). By preventing the non-covalent (electrostatic or ionic bridge) complexes which are necessary to proceed to the cleavage complex (step 3), the reaction is effectively blocked. There are a number of Top2 CICs (ICRF-187) and many fewer Top1 CICs. Note that CICs can be highly non-specific since even elevated NaCl can even mimic a CIC. In other cases, strong DNA intercalators may interfere with the catalytic reaction sequence. Many in the field simply view a CIC as any agent that can interfere with the ability of a poison (like CPT and topo 1) to form cleavage complexes (ie, can ‘reverse or block’ the action of an IFP). This sort of dual drug testing approach can be complicated and we at TopoGEN have the view that it is better to directly test CICs in the absence of other drugs.

We offer this as a service.

These agents are technically poisons because they trap the re-ligation step in the sequence (or ‘poison’ the reaction sequence). Consequently, the enzyme becomes covalently trapped on the DNA target sequence and concurrently DNA cleavage is stabilized (single strand nicks with topo I and double strand DNA break for topo II). Mechanistically, it appears that IFPs intervene stereo-chemically in the cleavage complex, forming what is called a ‘ternary complex’ (topo+drug+DNA) wherein the IFP agent induces a mis-alignment of the cleavage intermediate making it unable to re-ligate. When testing IFPs (see Step 3, Fig. 1) it is vital that you perform a proteinase K digestion step, otherwise the cleavage products will shift in the agarose gel, making interpretation impossible. 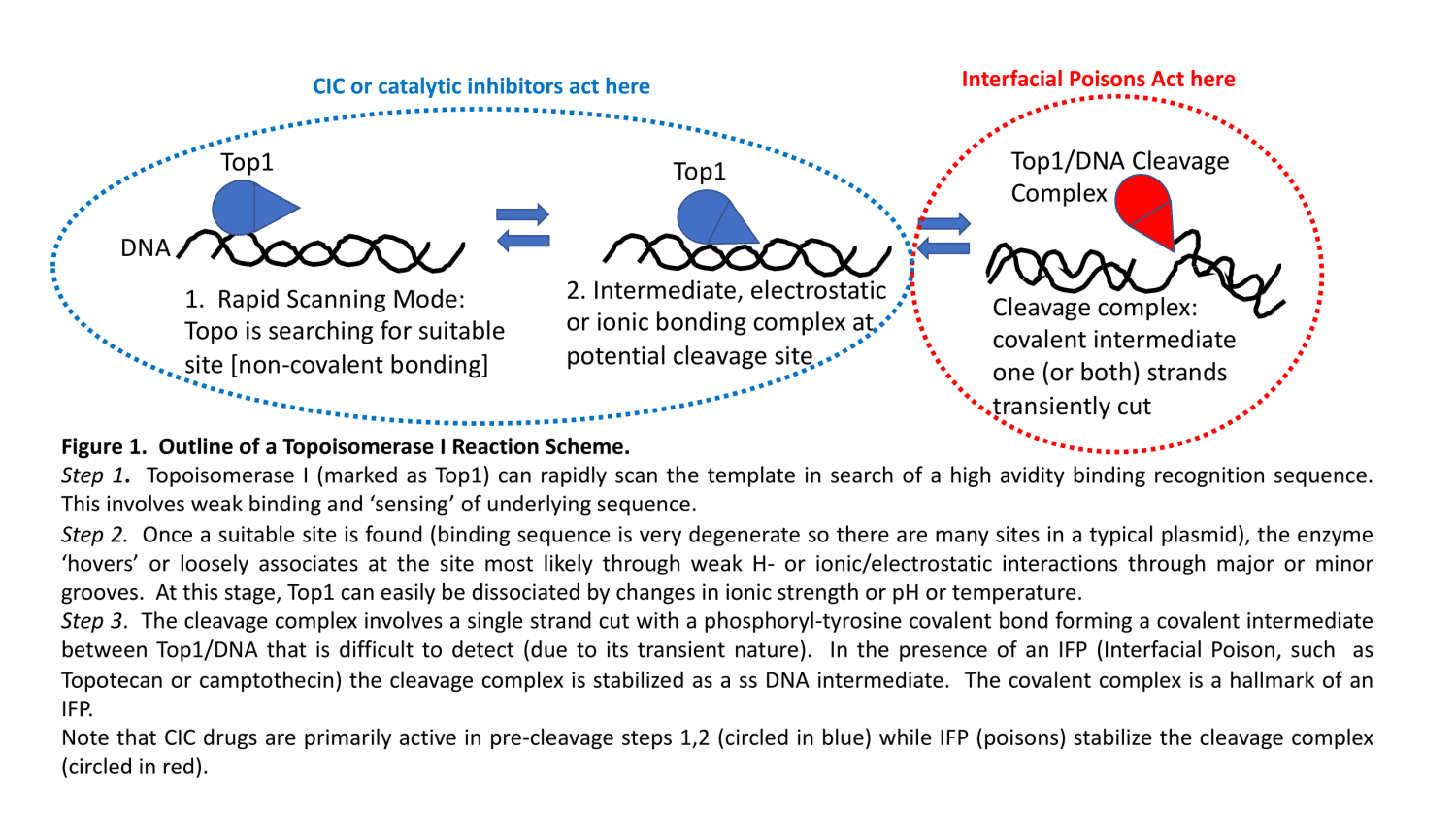 At TopoGEN, we developed, trademarked and patented many of the technologies associated with drug effects on DNA. We are leading experts at drug testing and assessment of drug action from a mechanistic standpoint. When you engage our services, we will describe and lay out a logical/rational approach that is rich in content and strongly mechanistic. We offer independent consultants who can validate our findings. Our services offer expediency as well. We can significantly accelerate the pace of your research; produce publication quality data and you will own the intellectual property that comes with our studies. We routinely enter into confidentiality agreements on projects, so your results are protected. Our in-house testing program is flexible, fast, and efficient.  You will receive publication quality data. The following are the “Top 10” reasons you should consider our screening services for your R&D needs:

We tailor each contract to offer maximum flexibility and coordinate with you over the course of the project to ensure intellectual flow of ideas and results. We will advise you on the best course of action with all hits. You can select the level of detail for the project that best suits your needs.  In some projects, there will be a need to re-examine, re-test or alter the course. How do we correct for work-load adjustments in the mid-stream? Our solution: we include on all projects, a small indirect cost that will allow us to perform additional key experiments without asking for additional funds. This is an advantage for clients and ensures that our high standards of data quality will be maintained. For example, if additional testing regimens are required, we carry out the service automatically. Importantly, there is no guessing on the budget and you will not pay additional fees.

For complete flexibility and to ensure cost-effective contracts, we offer two levels of reporting. At a basic level, included in all contracts, we provide well-documented data (PowerPoint, PDF or password protected cloud account). We draw conclusions, presented as bullets, on each slide and make a recommendation for further development and maturation of the project. For clients who wish to have a & ´manuscript´ style report, we offer fully referenced publication style reports. These reports are professionally prepared and are suitable for presentation to regulatory agencies. These publication style reports can be reviewed independently by third party opinion leaders in the field and the reviews appended to the final report.

Detecting a Topo I IFP Active Agent: some sample data

In this analysis, the client asked if we could test whether his compound (‘X’) was acting specifically as an IFP or poison. We designed the experiment to test this idea (see Fig. 1). We recommend that all unknowns be screened over a wide range of input concentrations to ensure that any weak positives will be detected.  In this case we tested up to 30uM and at the highest input we detected IFP activity, although it was relatively weak.  This experiment shows all the controls we include in the typical screen. These controls include markers that unambiguously identify the position of the various DNA as well as positive and negative controls.  In this case we use the negative control (VP16, a Topo II poison), to clearly demonstrate that we are indeed detecting a Topo I event (ie, VP16 had no effect on the reaction with topo I as expected).  Our positive control, CPT, generated the expected single strand DNA nicking event and yielding nicked circular DNAs (red circles).  Because all controls worked as expected, we conclude the compound X is a week interfacial poison direct against human Topoisomerase I.  We note that a similar approach can be used to detect CIC active drugs; however the experiment must be slightly modified to reveal basic catalytic inhibition.  In this case, analysis of a novel Topo I CIC active agent should block or inhibit the ability of the enzyme to induce DNA cleavages. 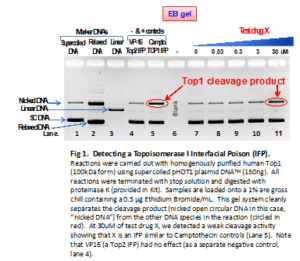 In this analysis, we tested whether a drug might be an IFP, CIC or intercalator using our dual gel system. The controls, VP16 (a topo II IFP) and CPT (topo I IFP) clearly show that the reaction is reporting accurately since the topo II IFP drug does not induce cleavages while the topo I IFP drug (CPT control) clearly induces accumulation of nicked OC DNA (red ring). These data clearly show that test drug X is neither a CIC nor an IFP. Additionally, the test drug does not alter the distribution of topoisomers and is not a DNA intercalator. Gel A (EB Gel) is important since it reveals that the enzyme is highly active under the conditions of the experiment (as attested by the formation of nicked form II DNA in Lane 4, red circle). Note that in Gel A (EB gel) the resolution of SC and relaxed DNA species is very poor, which is normal; however, Gel B (non-EB Gel) very clearly shows that the enzyme was highly active since all supercoiled DNA was converted to relaxed set of topoisomers (marked with blue bracket, lane 6).  Also, the Non-EB gel very clearly resolves all topoisomers and it is clear that the topoisomer ladder was not influenced by the test drug (lanes 6-10); therefore this drug is not a DNA intercalating agent. 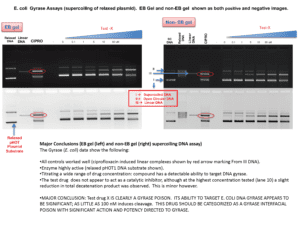